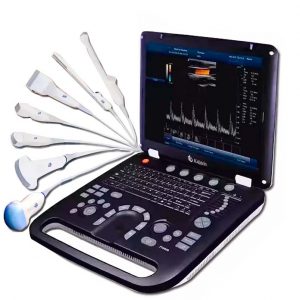 That is, an ultrasound scanner is a medical device that is typically used to provide two-dimensional images of most soft tissues without having to subject patients to ionizing radiation. Medical ultrasound is not only a safe, painless and non-invasive test, but is now a very useful test for medical diagnosis.

Structure of an ultrasound scanner

Typically an ultrasound scanner has in its structure a beam forming unit, a central processing unit, a user interface (keyboard, control panel, trackball), several probes (transducers or scanning heads), one or more video screens, some type of recording device and an electrical power supply system.

To obtain the ultrasonic images, a probe is placed on the skin (after applying an acoustic coupling gel) or inserted into a body cavity. Ultrasonic probes have elements made of piezoelectric materials (materials that convert electrical energy into acoustic energy and vice versa). When the ultrasonic energy emitted from the probe is reflected by the tissue, the transducer receives some of these reflections (echoes) and transforms them back into electrical signals. These signals are processed and transformed into an image. It is important to note that during the process there is no ionizing radiation and until now no side effects are known, so it is the method of choice for monitoring pregnancy.

How does an ultrasound scanner work?

An ultrasound scanner is a specialized equipment, where the device’s transducer picks up the echo of ultrasound waves and a computer turns it into an image that appears on the screen. Generally, the elements that make up the transducer are made of ceramic glass called piezoelectric materials. These materials are capable of generating sound waves when an electric field passes through them, and they are also capable of operating in the reverse direction, producing an electric field when it receives sound waves.

Ultrasounds are high-frequency sound waves (more than 20 000 cycles per second or 20 kHz) that are not audible to humans. Different tissues alter waves in different ways, some directly reflect them and others disperse them in the form of echoes before they reach the transducer. That is, using the speed of sound and the time each echo returns, the scanner calculates the distance between the transducer and the tissue limit. Deeper reflected echoes are more attenuated than surface echoes. When echoes return to the transducer it is possible to reconstruct a two-dimensional map of tissues and organs.

Is an ultrasound scanner safe?

An ultrasound scanner is a fairly safe device for the human body, because even though ultrasonic waves penetrate the body’s cells, they do not generate negative effects unlike ionizing radiation used in X-rays or a CT scan.

This makes ultrasound one of the safest and least invasive diagnostic procedures, through which various parts of the body can be examined.

What are the medical applications of ultrasound scanner?

An ultrasound scan allows you to assess the size, shape, and condition of specific blood vessels, organs, and tissues. Through its use, tumors, abscesses, cysts, neoplasms, and post-traumatic lesions can be diagnosed.

These equipment are commonly used in imaging departments and other clinical departments, as well as in independent imaging centers and private medical offices, mainly for vascular and gynecological-obstetric applications.

What do we offer you in Kalstein?

Kalstein is a company MANUFACTURER of medical equipment of the highest quality and at the best PRICES in the market, where you can make your purchase confidently. In this opportunity we present you new Ultrasound Scanner Doppler YR05152, a color equipment with screen of 15 inches, specifically useful for studies of the heart and pregnancy. This computer has the following features:

For more information we invite you to take a look  HERE

We are pleased to invite you to Kalstein's webinar

A laboratory vortex mixer is a device used to shak

🆕 An ultrasound scanner is a medical device tha

🆕 In general, micropipettes are useful for hand

Reposted from @newscientist A white hot river of h

🆕 Today an ice maker is considered a key piece

🆕 A pH meter is a laboratory equipment that is

Use of the Kalstein microtome! 👨🏻‍🔬🦴

🆕 Why should vaccines be cold?⠀ In very basic

🆕 An oxygen concentrator is a device that sucks

Reposted from @bbcnews A rocket launched by Elon M

🆕 A bioanalysis or diagnostic laboratory is a p

🆕 An autoclave is a piece of equipment that all